Although this page is much ado about me (and I don’t expect anyone other than friends and family to actu­ally read it), I want the rest of the site to be about people, places and things that I find wonderful, beau­tiful, myste­rious, intriguing, inspiring... and hope visi­tors to the garden will as well.

About 5 years into my “saintly inspired” artworks, I came to realize that I have a special affinity for the Celtic (partic­u­larly Irish) saints.  Although many of my patrons and friends strongly believe in “past lives,”  I lean more toward “genetic memo­ries,” and it bothers me that I have yet to find a Celtic branch anywhere on the family tree. (Though my son Geoff has recently created a Celtic offshoot by marrying Maureen and producing Kaerigan and Rowan.)

My Catholic heritage is all-German and all-female...

So, yet another reason why I feel Hildegard speaks to me: a Germanic connection.
If you read (when you have time to spare, LOL)  “About the Artist” on the SaintsPreserved site, you’ll find out how one partic­ular aunt inspired me. My mother was the youngest of 7 sisters, my Aunt Marie, the eldest. They were the daugh­ters of Jacob and Dolores Hutzelman, a country doctor and a “daring” nurse. (The story of my beekeeping grand­fa­ther can be found at  St. Gobnait’s place.) 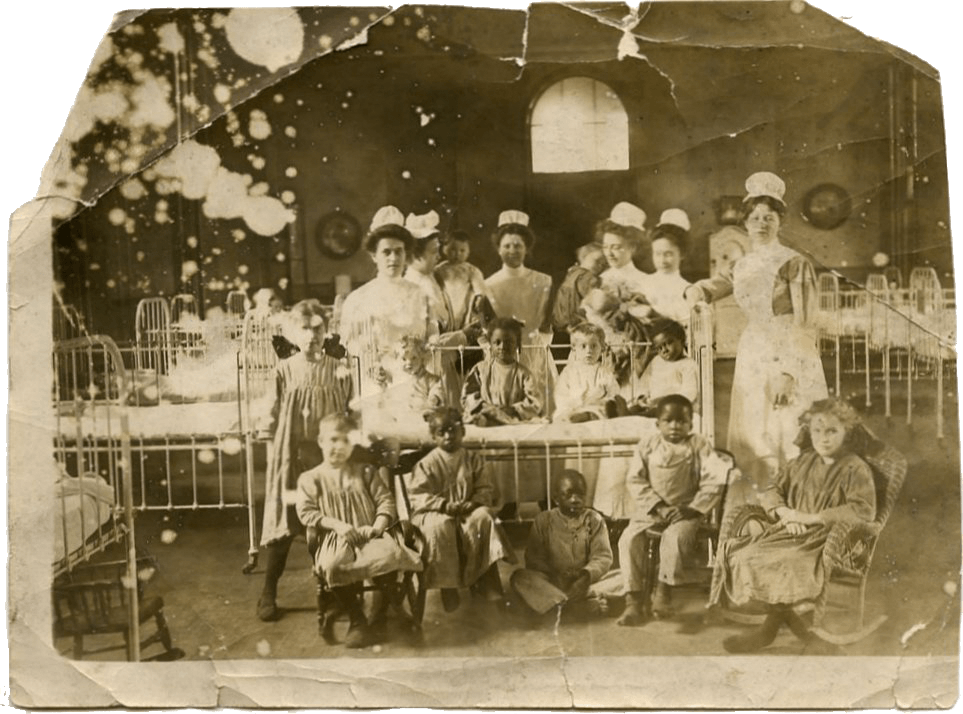 My grand­mother (Dolores) is the one holding the small child. She scan­dal­ized the family by becoming a nurse. (Click to enlarge.)

My grand­mother  scan­dal­ized the family by becoming a nurse. Marrying a doctor who not only grad­u­ated at the top of his class, played varsity foot­ball and commuted from the family farm, 30 miles  from UC Medical College, on the motor­cycle he built himself, some­what miti­gated their misgiv­ings. However, he was a Lutheran (actu­ally a Humanist)  and conse­quently never quite measured up.

Two of my grand­moth­er’s sisters did honor the family by becoming nuns:

Mary Grace Julia (known to our family as “Aunt Julie”) even­tu­ally became “Mother Genevieve” at the Ursuline Academy in Cincinnati, which she helped found. She was a teacher, prin­cipal, and director of the kitchen, special­izing in the subjects of history and religion.

She died when I was a toddler, so I never got to know her, but it sure sounds like Hildegard would have greatly appre­ci­ated her!

Mercedes  (aka “Sister Mary Berchmans”  — I believe she was a Dominican) remains a mystery to me and my cousins. We vaguely remember hearing about “Aunt Mercedes,” whom we all of course asso­ci­ated with the car. Ironically, the only picture extant (so far) is of her standing in front of a car and thinking about shooting off an arrow: 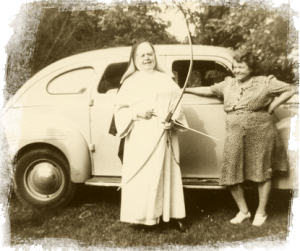 Her sister Bunty appears to be devil­ishly gleaming at her. The most I remember of “Aunt Bunty” were clicking tongues and jokes about her, and that she and her husband were entre­pre­neurs in shady ventures such as breeding grey­hounds for racing.

But what­ever happened to [Great] Aunt Mercedes?  I’d like to think  she ran off to rescue the greyhounds.

My grand­mother had quite a few siblings, and their father was a carpenter named Joseph, who made a roll-top desk for his son-in-law, the doctor. My son Joseph will one day inherit it, and it will be quite the anachro­nism in his high-tech profes­sion! My St. Joseph Anachron is dedi­cated to both of them.

These were a few of my moth­er’s aunts. Whether they had an influ­ence on her, I have no idea. She was a nursing student when she met my dad (a WASP Methodist), married, had my brother and me, then went on to pursue degrees in painting, pottery and Art Therapy. 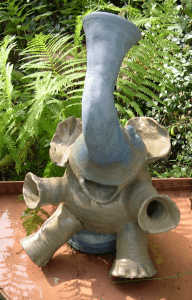 This elephant resides in my own garden. It’s a thrown/sculpted piece by my mother. I have more about her in “Artistry.”

My own aunts however, had great influ­ence on me. Mother was the youngest of the sisters, but the first (of only 3) to marry. They were all in medical profes­sions deemed suit­able for women born in the ’20s: dietitian, hospital photog­ra­pher, chemist, and 3 RNs. Several of my pieces in the Saints Preserved Collection are dedi­cated to them.

So I also have the “nuns,” “medical,” “creative arts” connections.

(If you’ve had enough of this exciting narra­tive, I do hope you’ll visit some other spots in the garden that you might find truly interesting...)

We’d love to hear your own stories.
Please contact us.

You’ll see my comments throughout the articles, making “connections.” 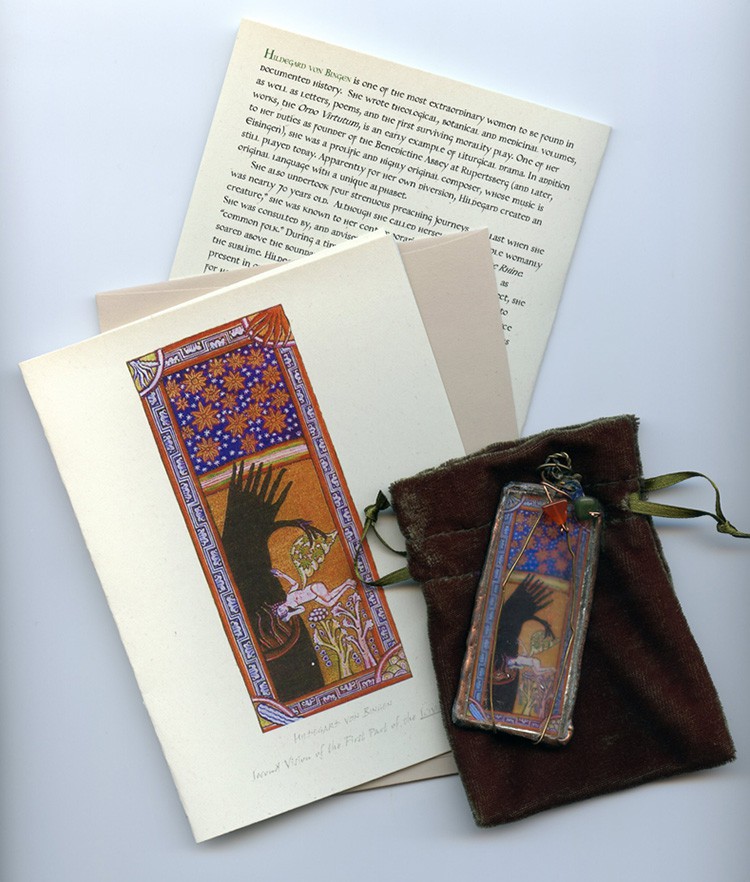 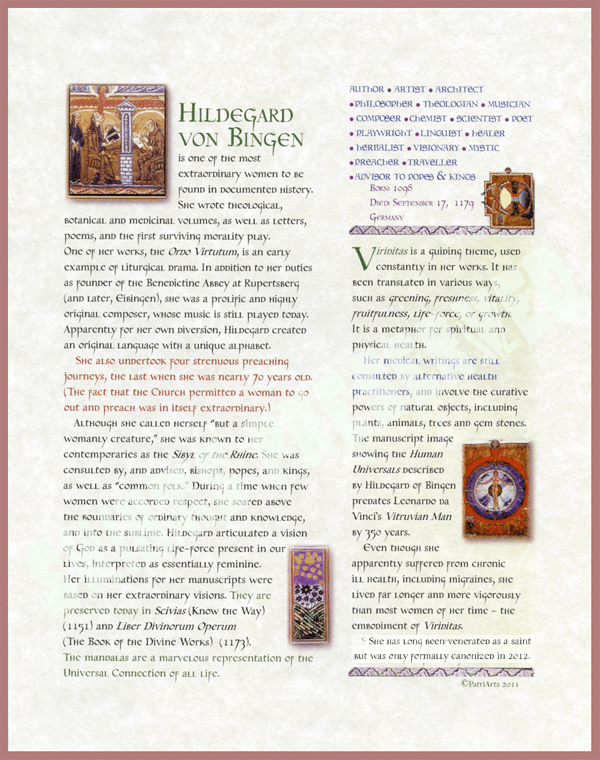 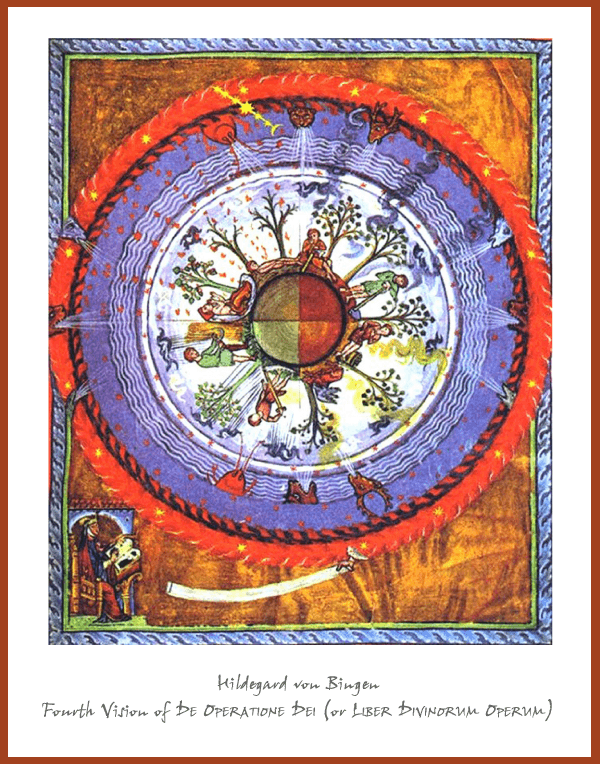 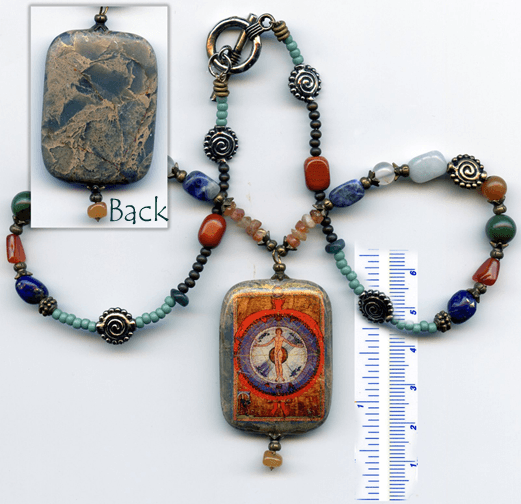 My Hildegard-inspired artworks are avail­able for purchase at PatriArts Gallery.

Next Connections: Coming to Her Senses