This section is devoted to nuns, who, in the spirit of Hildegard, are/were also prac­ticing, profes­sional artists.

A work-in-progress. We welcome your suggestions. 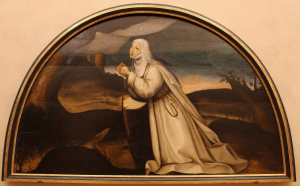 Suor Plautilla Nelli TOSD (1524 – 1588) was a self-taught artist — the first-known female Renaissance painter of Florence, Italy. She was a nun of the Dominican convent of Santa Caterina da Siena, and was heavily influ­enced by the teach­ings of Savonarola and by the artwork of Fra Bartolomeo.

Born into a wealthy family, she became a nun at the age of four­teen, even­tu­ally elected prioress three times. The convent was managed by the Dominican friars, led by Savonarola, whose preach­ings promoted devo­tional painting and drawing by reli­gious women to avoid sloth, thus the convent became a center for nun-artists. Her sister, also a nun, Costanza, (Suor Petronilla) wrote a life history of Savonrola.

Nelli enjoyed the esteemed favor of many patrons (including women), executing large pieces and minia­tures and is given credit for designing the initial capital letter, used in manu­scripts...(click to read more...)

In the course of researching Sour Plautilla Nelli,
I came across a wonderful site:
Invisible Women
...a part of the
Advancing Women Artists Foundation

“Our quest is engen­dered by curiosity; our mission is fed by convic­tion. Women artists must be cele­brated and their work must be seen. Both their past and their future must be fully reclaimed — a single artwork at a time.” -Dr. Jane Fortune, author, art collector, phil­an­thropist, Advancing Women Artists Foundation, Founder and Chair

Corita Kent’s art reflects her spir­i­tu­ality, her commit­ment to social justice, her hope for peace, and her delight in the world around us.

Sister Mary Corita Kent (1918 – 1986), was born Frances Elizabeth Kent in Fort Dodge, Iowa. An artist and an educator, she worked almost exclu­sively with silkscreen and serig­raphy, helping to estab­lish it as a fine art medium. Her artwork, with its messages of love and peace, was partic­u­larly popular during the social upheavals of the 1960s and 1970s. (She designed the 1985 USA “love” stamp.)

After high school, she entered the order of Sisters of the Immaculate Heart of Mary in Los Angeles. She took classes at Otis College of Art and Design and Chouinard Art Institute and earned her BA from Immaculate Heart College in 1941. She earned her MA at the University of Southern California in Art History in 1951.  She taught in the Immaculate Heart College and was the chairman of its art depart­ment. She left the order in 1968 and moved to Boston, where she devoted herself to making art. She died of cancer in 1986.

Her work may be purchased at the Corita Art Center which supports the ongoing char­i­table programs of the Immaculate Heart Community.
-gleaned from wikipedia

Connections: This image is of my father in the ’50s, sitting in one of two Eames chairs (designed as “his” and “hers”). My son Justin, now an indus­trial designer with a focus on furni­ture, is in posses­sion of them. The photo was taken by my Aunt Jane, a photog­ra­pher.   My father also knew Bucky Fuller (barely), and for a long time we had a portable geodesic dome stored in our garage. Though, honestly, at the time I had no idea who she was, Corita Kent had an enor­mous influ­ence on my art and philos­ophy. My Aunt Marie, loved her work and often gave me her cards and posters.

Sister Gabriele Uhlein, OSF, Ph.D. is dedi­cated to the recovery of the Christian mystical tradi­tion and the honoring of intu­ition and creativity in spir­i­tual deep­ening. She is well known for her Franciscan approach to contem­pla­tive ecolog­ical conscious­ness and conducts work­shops grounded in the wisdom of the Christian mystics as well as contem­po­rary spir­i­tual thought, both East and West.

Her mandala making and intu­itive painting sessions are creative personal growth oppor­tu­ni­ties and she also offers indi­vidual intu­ition training and creativity coaching sessions. In 1983 Gabriele authored a small book: Meditations with Hildegard of Bingen. She has been sharing her love of Hildegard ever since. Every September she hosts a Hildegard Fest at the Christine Center and a “Hilde-garden” is newly evolving.